Science is a human endeavor and as such prone to errors. Therefore the peer review process, which is the check of scientific methods and results by scientific peers prior to or after their publication, plays an important role in scientific knowledge generation. Most journals still apply the pre-publication review principle, meaning that a paper only gets published after careful checking and acceptance by one or more reviewers.

A 2014 meta-analysis on the effects of low carbohydrate diets on weight loss seems to provide an alarming example of the failure of the pre-publication peer review process. In this study led by Celeste Naude from the Stellenbosch University of Cape Town, South Africa, the authors concluded [1]: “There is probably little or no difference in weight loss and changes in cardiovascular risk factors up to two years of follow-up when overweight and obese adults, with or without type 2 diabetes, are randomised to low CHO diets and isoenergetic balanced weight loss diets.” This result apparently received large media coverage, particularly in South Africa, with headlines and comments claiming a “debunking” of low carbohydrate diets and even warnings against their usage. While this already shows the strong bias against the low carbohydrate approach in the media, a re-examination of the original data by Zoe Harcombe and Tim Noakes now reveals so many errors and mistakes in the meta-analysis that one has to seriously consider the possibility that the errors were made on purpose to achieve at least an even result between the low carbohydrate and “balanced” diets [2]. 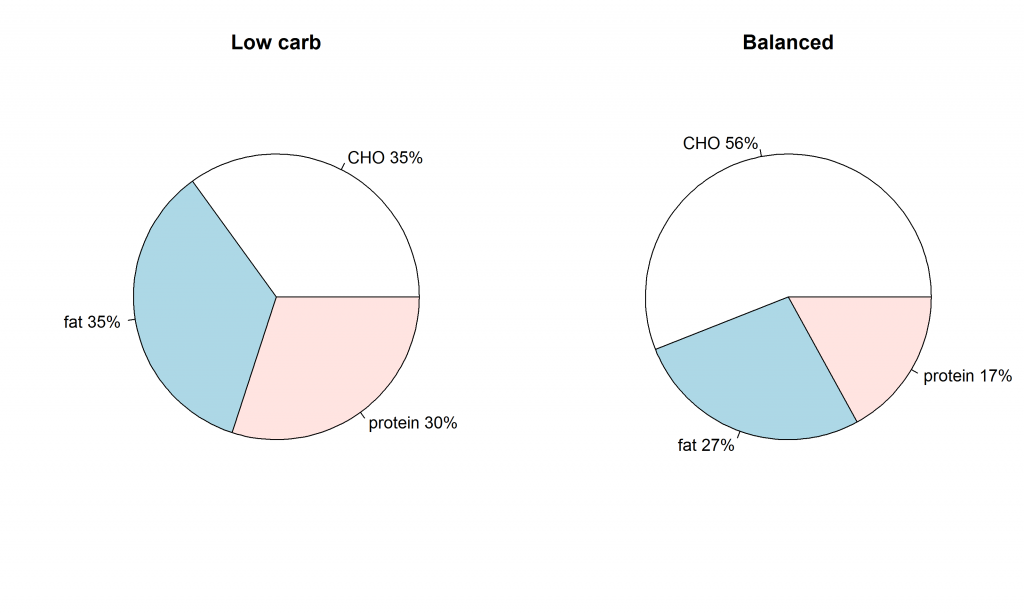 Composition of the „low carb“ and „balanced“ diets in the meta-analysis of Naude et al. [1]. How can one call the diet on the right side balanced?

First of all, Harcombe and Noakes rightfully point out that the “low carbohydrate” diets included in the meta-analysis are at best “lower carbohydrate” diets as shown in the figure where I have plotted the average macronutrient composition of the “low carb” and the “balanced” reference diets (I always wonder how anyone could seriously consider a diet with >50% energy balanced). Harcombe and Noakes further show that four of the 14 studies included in the meta-analysis should not have been included according to the inclusion criteria stated by Naude et al. Even worse, they reveal at least ten errors or inconsistencies in data extraction from the included studies of which nine biased the result in favor of the higher carb diets. By re-analyzing the data of the ten studies fulfilling the Naude et al. inclusion criteria without these errors, the standardized mean weight loss difference between the low carb and high carb diets was -0.272 (95% confidence interval [-0.506, -0.039]), which indicates a significantly greater weight loss on the low carb diets at 3-6 months.

For me putty download , the probability that Naude et al. [1] happened to make these serious mistakes unintentionally is very small, since they almost exclusively contributed to a disadvantage of the low carb diets. According to Harcombe and Noakes, many of these authors were also known for publicly opposing lower or low carb diets. Thus, there were probably serious conflicts of interest involved in conduction the meta-analysis, producing another example of scientific “waste”. The bad thing is that such waste managed to survive the peer review process that should have detected it and cleaned it up. Even worse, the wrong result stimulated a totally overdrawn media response that could have misinformed laypersons about the possible benefits of low carb diets. The good thing is that Harcombe and Noakes discovered these errors. Of course, they were probably driven by their own interests and beliefs, but personal opinions and beliefs belong to any human scientist and are not bad per se as long as they are honestly acknowledged or tried to be avoided in the scientific methodology. Even if the media probably will not correct their former misinformation – at least science seems able to correct itself.